All Collections
Day-to-day operation
What Operating Systems are supported

What Operating Systems are supported

What Operating Systems are supported

Written by Matt Langston
Updated over a week ago 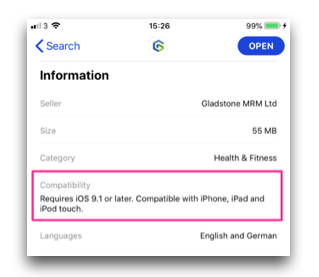 To find out the version of Android that your app supports, first place to check is on the Google Play listing. Find your app and scroll down to the details -- there you'll see the version required:

TLS 1.0 is widely used but now considered insecure, so many IT departments are moving to TLS 1.2. This has an impact in the app in two places:

The app works fine with TLS 1.0 systems for all Android versions above 4.03.

Older versions of Android do not support TLS 1.2 out of the box. From version 3.11 onwards of the app, support for Android versions 4.03 to 4.3 is limited as shown in the table below. If a customer has a phone running one of these Android versions and wants to overcome these limitations, their options are:

Did this answer your question?